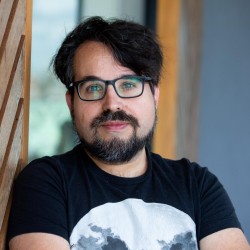 As a Developer Advocate at QuestDB, I help developers make the most of their (fast) data, I make sure the core team behind QuestDB listens to absolutely every piece of feedback I get, and I facilitate collaboration in our open source repository.

Before working at QuestDB I spent over 20 years developing software professionally and sharing what I learnt with the community. I've spoken at events in over 25 countries, mentored dozens of start-ups, taught for 6 years at different universities, and trained hundreds of professionals on cloud and data engineering.

Javier Ramírez on the web

Speaking at your event

If you are hosting an event with developers, I will be happy to participate, as long as you have a code of conduct and are committed to diversity. If I need to travel, I prefer mid-sized or large events. Of course I am more than happy to also engage online with events of every size. My local time zone is Central Europe. I can present both in English and Spanish. Just ping me (public or privately) on twitter.

If I am speaking at your event, please use only the information above this line. Click for high resolution image and Spanish bio

Software engineer (working in IT since 1994) with a strong interest in Cloud Architecture and Big Data (since 2012), which took me to work as a Developer Advocate at AWS from 2019 to 2022. Before that I developed web applications and distributed systems with a focus on the data layer. I co-founded teowaki and aprendoaprogramar. I used to be Head of Engineering at Datatonic, partner and CTO at ASPgems, and a co-founder at Utende.

Having co-started 3 companies, and employed at 2 start-ups, I bring a startup mentality even when working with large corporations.

I'm currently based in Madrid. In the past I've worked in Zaragoza, Brescia, New York, Barcelona and London.

All along my career I have been a technical trainer on different subjects. I was also a part-time teacher at different universities on the topics of Software Engineering and Programming Languages (JAVA). In the past, I trained companies like Google, Cisco, Inmarsat, Lastminute, HSBC, Accenture, Zalando, BBC, JustEat, ScotiaBank, or HomeDepot.

In 2021, the Spanish Ministry of Education contracted me as one of the six experts to define the competencies a professional must have to receive a professional accreditation in Cloud. I reviewed the whole document, but especifically wrote the chapter on Databases, data processing, and analytics.

When it comes to programming languages, I am competent at Python, Ruby, and JAVA. I've also used PHP and C++ in the past. Not scared of learning new tricks. After all, if I could learn to program using BASIC on an Amstrad when I was 12, and had to write COBOL on paper while at Uni, I am pretty sure I can handle whichever stack is hot right now.

I was officially a Google Developer Expert on the Cloud Platform since 2014, and GCP Authorized Trainer since 2015, until I quit the program in 2019 to join AWS. I was Google Certified both as Cloud Architect and Data Engineer, and due to my outstanding work with the data layer on GCP, Google regularly referred me to help their customers with complex data migrations.

I'm also the author of the book (not a best-seller, mind you) “Aptana RadRails: An IDE for Rails Development” , which I wrote back when I was an active member of the Ruby scene. I was a founding member of the Spanish Rails Conference, the Spanish Ruby Users Group (SRUG), madrid-rb, the Ruby users group in Madrid, and the Spanish Railscamp. I used to be a coach at codebar and Railsgirls. I mentored at several editions of MassChallenge and Google Launchpad.

I worked as a lecturer for three Universities:

I have delivered talks and workshops at several other universities, training institutions, and bootcamps, including Instituto de Empresa, AFI, UPC, Universidad de Valladolid, IronHack, and Hack-a-boss.